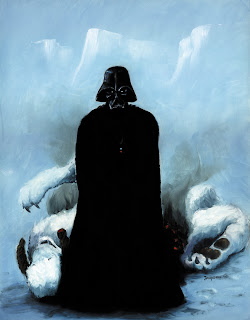 Oil on illustration board.
Click for a larger view.
I don't think it would be a fair fight.

It has been about 7 years since I last painted with oils. After studying a lot of illustrations by the late Frank Frazetta, I began to get the urge to paint something in oils again. After my interview with Chris Hopkins, the matter was settled. As I thought about a subject for the painting, the idea of Vader fighting a snow beast from The Empire Strikes Back came to mind. I painted it with oils on gessoed Crescent cold pressed illustration board.
Posted by Martin Jamison at 9:25 PM