An Interview with Chris Hopkins 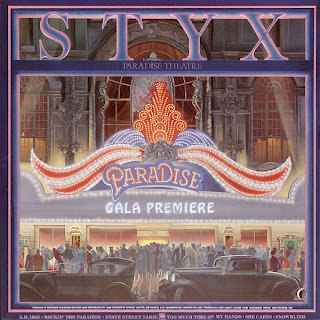 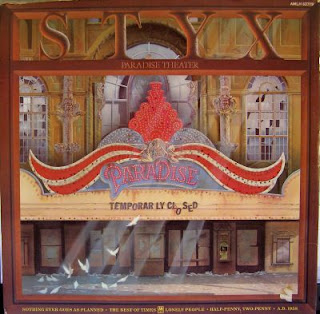 Paradise Theater (Back)
As I was growing up I found that one of the things I was able to do reasonably well was art. I enjoyed art class, I loved to draw and paint and I found inspiration in the work of professional illustrators. I studied their work and technique for hours, trying in vain to come close to their level.

One illustrator who inspired me then and continues to do so today is Chris Hopkins. His illustrations for the Styx album Paradise Theater continue to captivate me. I recently had the pleasure of talking with Chris Hopkins and thought I would share some of our conversation with you.

How long have you been an illustrator?
Well, I started when I was a student so I've been doing this since about 1978.

How has your style changed throughout your career?
When I started my style was tight airbrush work. This was back in the 1980s and I did a lot of work with the movie industry and the music industry. I did a lot of work for the entertainment industry back then. I don’t do as much illustration now. I do more painting for museums and I work with oils.

What was it like working in Los Angeles at that time?
That was a great time to be an illustrator. The budgets were better, we had great relationships with everyone. We were all doing traditional illustration work. This was pre-digital so everything was done traditionally. It was a great time.

How has the business changed since then?
It has changed radically. Most of the work is handled digitally now. So if an art director wants an illustration, rather than commission a piece he can go to a stock house and buy a photo and manipulate it digitally. It’s a more difficult time to be an illustrator. But on the good side, in some ways the work is more interesting now.

I’ve always admired your Paradise Theater illustration. The music on the album is good but in my opinion, the packaging is what ties it all together and makes it so memorable. Can you talk a little about that piece?
That was a good project. I did the illustration for the front and back of the album. I also did the illustration on the center disc of the record itself (this was also laser etched on the vinyl album) as well as the billboard advertisements and the sleeve for the 45 record. It was quite a project. There is a lot of interest today in that illustration. I no longer have the Paradise Theater illustration, but a lot of my other illustration work has been selling. 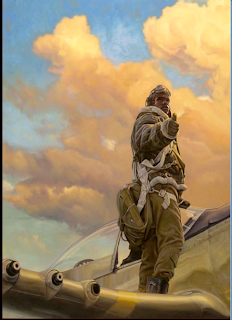 Butterflies, The Tuskeegee Airmen (Oil on Canvas)
Click for a larger view.
What made you transition from airbrush painting to oil painting?
I really grew to dislike airbrush painting. Of course it’s not good for you to breathe in all that stuff. It’s also messy and you have to cut all the masks. Also, I could see that eventually digital art was going to replace airbrush work. I was working with an artist representative in New York and I told him that I wanted to do oil paintings. He asked me if I knew how to do that and I told him, “Sure I do”. I didn’t really know if I could do it but I was more of a risk taker back then. He called me the next day and told me he had an oil painting assignment for me and I just about soiled myself wondering how I was going to do it. But I did it and it worked out well and I’ve been doing that since.

You mentioned that you work with an artist representative. How did that come about?
Well I had been with a studio for awhile and came to know quite a few reps. When I left the studio in 1982 I was approached by a lot of reps. I chose some guys from New York and we’ve been great friends ever since. 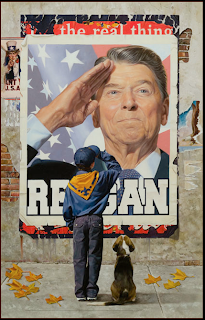 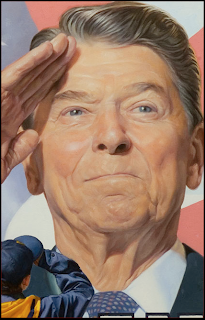 I’d like to ask you some questions about your work process.  I’m thinking about the photographic realism of your work and specifically your painting of Ronald Reagan. How did you master the ability to render details such as skin wrinkles and bone structure in faces or the folds and wrinkles in clothing?
I've never had difficulty with that. With folds in fabric or with patterns on water, much of it I just make up, unless I’m doing a portrait and someone is likely to expect it to look exactly like the subject. I study the surface and begin to notice the core shadows which are soft edged and the cast shadows which are hard edged and as I begin painting them I just find a rhythm and I just carry that through. So I usually just make that stuff up. I also carry around a sketch book and I’m always filling up my sketch book for practice. Someday I’m going to pass my sketchbooks on to my kids and my grand children and they will be able to go through it and see the kinds of things that I would think up.

Do you prefer to paint from models or from photos?
I’ve done all of it. Sometimes I will set up a model but often I will just take my own photos and work form those. I might have a friend take a photo of me in a pose. When it comes to armor, I just make it up. 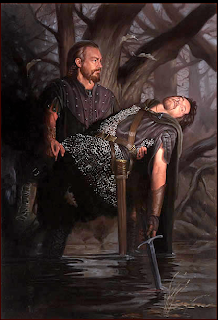 Winterstag, The Moor of Darkness (Oil on Canvas)
Click for a larger view.
What is the average size of your paintings?
The size really varies. I've worked from 36”x48” (sometimes smaller) and up to 6’X8’.

Do you ever make a mistake on a painting and worry that you've ruined it?
Of course I do. But I never say die. I’ll just scrape it off and rework it. I’ve been doing this long enough to know how to deal with that.

What advice do you have for anyone considering illustration as a career?
Well, no one knows exactly where things are going in this business. There is a lot of debate about that. But today it's all digital. I don’t do digital work and I haven’t needed to because I’ve been doing this so long I’m grandfathered in. If you can learn to do digital I say go for it. But most of all, do what you love to do and don’t be dissuaded. These are difficult times to be in the business but don’t give up. Just do what you love to do.

Chris Hopkins is a true gentleman. It was an honor and a pleasure to talk with one of my illustration heroes.
To view more of Chris Hopkins work, visit his website http://www.chrishopkinsart.com/

All paintings and illustrations shown in this interview are by Chris Hopkins.
Posted by Martin Jamison at 8:25 PM

Email ThisBlogThis!Share to TwitterShare to FacebookShare to Pinterest
Labels: Interviews/Articles