Some time ago I was asked to create a magazine ad for a tile store. The client wanted imagery that highlighted the unusual creative flair of the store and it's products and services. To do this, I created the ad around a theme based on the character Dorothy from The Wizard of Oz in which I showed Dorothy (her feet and legs only) wearing the famed Ruby Slippers and walking on a golden-tiled road. Dorothy represents Valerie (the store owner). The client was very happy with the ad. 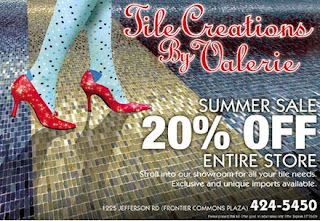 The first ad I created for this client.
(Click all photos for a larger view).
When I received the new request for an ad announcing that Valerie is moving, I wanted to continue the Oz theme I had created for the earlier ad, only this time showing Dorothy (I mean, Valerie) on the move. I imagined a pretty woman in ruby shoes sitting on suitcases, taking a moment to rest from her travels along Yellow Brick Road.

There was no budget for hiring a model, renting props and hiring a photographer for a photo shoot so I was stuck using stock photography. After much searching, I found several photos which I could use to create the image, one of which matched my idea almost perfectly. There was still going to be a significant amount of photo manipulation but I expected as much with such a conceptual ad. 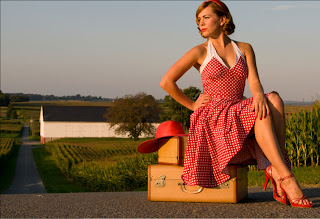 This is the original photo I found on Photos.com
Working in Adobe PhotoShop, I first wanted to make some adjustments to the model. Using the Smudge Tool at a low setting I began by “painting” along her hair and skin. The effect is very subtle but it helps to minimize noise in the photo and give the model a slightly polished look.

Ruby Slippers and...Hat?
With whatever photos I might find, I fully expected a need to change the color of the shoes to red. The fact that I had found almost the perfect image to match my idea and the shoes were already red was a nice surprise. They aren’t the style I was imagining but I do believe they will work just fine. To give the impression that the shoes are made of rubies, I used the Brush Tool with a soft edge and a few adjustments to the Shape Dynamics and Scattering Settings, painting sparkles in varying sizes all over the shoes. I like working on multiple layers so I can have more control should I need to make changes later on. I used three different size sparkles (so three different layers). I also added sparkles to the hat. After all, the stylish lady has to accessorize and if she wears ruby shoes she’ll have to have a ruby hat! 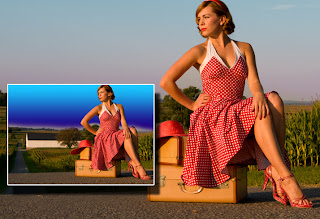 The inset image shows the blend layer before I adjusted
it to the blending mode and opacity I wanted.
I liked the overall lighting of the image and the fact that it looks like the sun is just rising (or setting). And while I liked the warm glow that is falling on the model, I think the landscape looks too much like Kansas and not enough like Oz. Also, the sky lacks color. To change this I added a layer and filled it with a blend from cyan to dark blue with the blending mode set to Color and the opacity adjusted to 16%. I also added two other adjustment layers affecting the Brightness/Contrast and the Hue/Saturation of the overall image. This helped brighten everything and color of the sky so it looks more blue than gray. I’ll do more to the sky later. 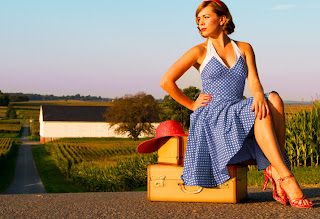 Red dress changed to blue.
At first I liked the red dress with white polka dots but I began to think the wardrobe had too much red. I decided to change the color of the dress to blue with white polka dots. I did this by first isolating only the red areas of her dress with a mask I created from alpha channels. Loading the alpha channel as a selection, I added an adjustment layer (hue/saturation) swinging the color to blue and reducing the saturation to reduce the color intensity. 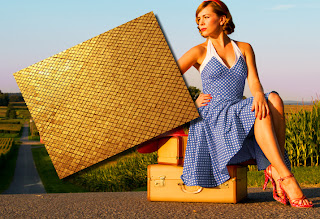 For Yellow Brick Road, I found a stock photo image of gold tiles. Using Edit/Transform/Distort, I contorted the tile image so I could apply it to the road surface in the foreground. I added some shadows and adjusted the color slightly. 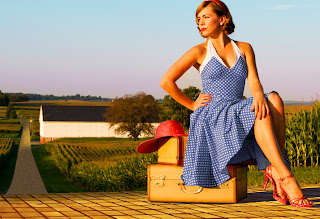 For the distant parts of the road I sampled colors from the foreground tiles to create a blend. Then I created an alpha channel and filled it with noise. Loading this alpha channel as a selection, I filled my background road with golden noise then applied a Gaussian Blur to soften the road so it would appear to be in the distance.

Next I wanted to apply an effect that has to be done to a flattened version of the image but I didn't want to lose my individual layers. To flatten my image while also keeping all of the layers, I hold down the option key while selecting Merge Visible from the Layers Pallette. This creates a new layer above all the others (which is actually a flatten version of the file) while keeping all the other individual layers intact. Next I used Image/Adjustments/Variations and chose More Blue. This cooled the previously too warm cast of the image and brightened up the greens and the sky.

However, I didn’t like the effect this had on the model and the rest of the foreground because I wanted them to keep their warm glow. To fix this I use a layer mask to remove the foreground elements from this layer, allowing the original warmer layers below to show through. 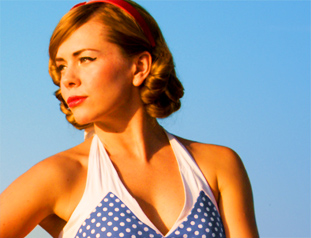 Hot model...cool, blue sky
I still wanted the sky to be more blue so I added a new layer and filled it with a radial blend from blue to no color, setting the blending mode to Multiply at 53% and masking out everything but the sky.
I tend to be a minimalist when it comes to my designs. I like to boil everything down to where I have just enough to accomplish the task. Anything more is excess baggage. I had been fighting the urge to put Toto into the ad throughout the whole process. I kept telling myself that Toto was not crucial to the message. No matter how hard I fought to put down Toto, the idea kept coming back.  I've learned to trust my gut. “After all,” my gut reasoned, “Toto may not have been crucial to the story (technically, you could have The Wizard of Oz without Toto) but Toto was most certainly crucial to Dorothy! ”


I found a couple of nice stock photos of dogs. I chose the Yorkshire Terrier and added it to the foreground. I flipped the dog image so it is looking in the same direction the model is looking. I also added accompanying shadows and made some color adjustments so the dog would blend into the rest of the scene.

Finally, I added some larger specular highlights to the ruby shoes and hat. Now the image is ready for the text. 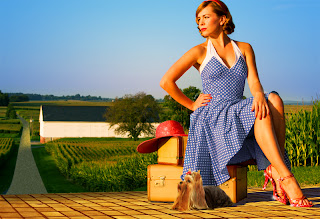 Importing the image to an Adobe InDesign document, I set the text in Linoscript medium, Spectrum semibold and Futura bold condensed. 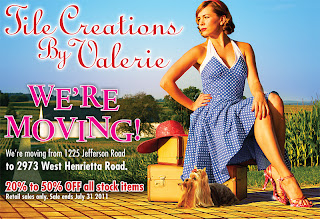 Completed Ad
This is one lady who knows exactly where she’s going.
Posted by Martin Jamison at 6:21 PM No comments: