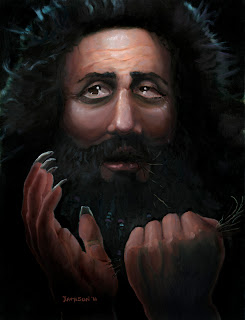 Nebuchadnezzar’s Madness by Martin Jamison ©2011
Oil on Strathmore Illustration Board
Click for a larger view
33 Immediately what had been said about Nebuchadnezzar was fulfilled. He was driven away from people and ate grass like the ox. His body was drenched with the dew of heaven until his hair grew like the feathers of an eagle and his nails like the claws of a bird. (Daniel 4:31-33 NIV)


34 At the end of that time, I, Nebuchadnezzar, raised my eyes toward heaven, and my sanity was restored. Then I praised the Most High; I honored and glorified him who lives forever. (Daniel 4:34 NIV)

This painting focuses on a moment from one of my favorite passages in the Old Testament. Daniel Chapter 4 is a very short chapter (only 36 verses long) and can be easily read in about 2 minutes. This chapter is fascinating in that it is written in the words of Nebuchadnezzar himself, the mighty king of one of the greatest empires in history. . .  Babylon.

In the year 605 BC, this pagan king began his invasion of Judah which would end in his victory and the exile of the people of Judah to Babylon. Nebuchadnezzar, no doubt, viewed this conquest (one of many during his reign) as a triumph for himself and his pagan deities. What he did not know, however, is that he was just a tool in the hands of an almighty God and he had just been given temporary custody over the people of this God. As a result, this king’s whole worldview was about to change. 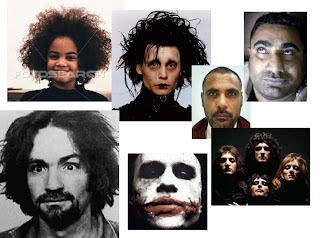 I used a lot of reference material for hair, lighting and expressions of insanity, including some photos I found in a news article about citizens of Iraq suffering from insanity. Iraq is the modern day name for the land that was once called Babylon. 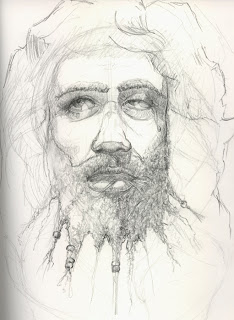 In my original sketch, you can see more detail in my handling of his beard than is visible in the final painting.

The challenge for me was to try to show a man awakening from insanity. I chose to do this through his eyes. One eye is still veiled or lost in an induced stupor. The other is awakened, humbled and repentant. I also used his hands for this purpose. One hand is still tightly clutching a bunch of grass, the food of an animal some of which still clings to his lips, while the other is open and surrendered.

The only hint that we are looking at a once noble man are the few remaining jeweled beads woven into his beard. I don't know if ancient Babylonian men decorated their beards in this way, it's just an idea I had so I went with it.

In Daniel chapter 4, we read the words of a man steeped in pagan thought who is, at the same time, trying to get his brain around a new understanding of a God he previously did not know, but whom he now understands rules everything:


"Now I, Nebuchadnezzar, praise and exalt and glorify the King of heaven, because everything he does is right and all his ways are just. And those who walk in pride he is able to humble." (Daniel 4:37 NIV)


If you want to read the whole chapter, BibleGateway.com is a great resource where you can read the same passage in 26 different translations and 43 different languages.
Posted by Martin Jamison at 11:36 AM