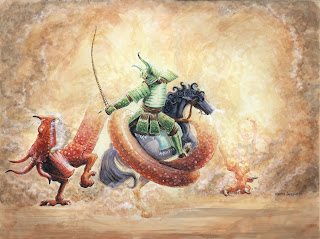 Watercolor on Crescent Cold Pressed Illustration Board
(Click for a larger view)
I've finished  my watercolor illustration of The Dragon Slayer! The slayer is engaged in an epic struggle with a fiery serpent. He clearly has experience with this sort of thing; his armor is crafted from the hide of a previously dispatched foe (note the horns in his helmet, the dragon scales  on his various guards, the under-belly plates protecting his chest and back, and the dragon teeth dangling decoratively from the tassels of his armor). Even while the death grip closes in around him he does not give in to fear. He steadies his aim, waiting for the moment when his enemy will expose its one weak spot (the roof of its gaping mouth). 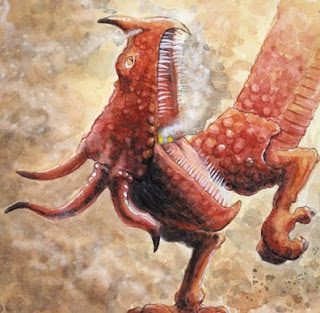 As the dragon prepares a sulfurous blast of flame it is already too late. The slayer's arrow is set to fly. 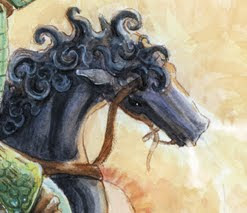 The dragon slayer can't win on his own. He needs his brave horse to carry him into the thick of  battle. Perhaps the slayer's worthy and courageous friend  is soon to be fitted for some handsome red armor.
Posted by Martin Jamison at 5:03 PM