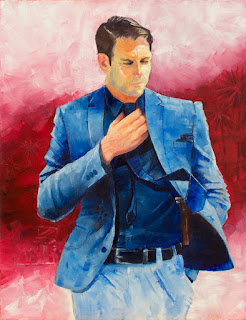 Click on any image to see a larger view.

My latest personal project is this painting of Raymond Chandler’s famous detective, Philip Marlowe. I enjoy Chandler’s writing and I have for some time wanted to illustrate a scene from one of his stories or a representation of Marlowe the character. The current pandemic and resulting quarantine has provided me with the time to do it. I painted this with water soluble oils on a gessoed masonite panel.

Raymond Chandler had been the Vice President of the Dabney Oil Syndicate. The Great Depression, along with his fondness for alcohol and his female employees, changed all of that. By 1932 he was unemployed. That’s when Chandler decided to take up writing.

He started with short stories for what were commonly called “pulp magazines.” His first printed story was Blackmailers Don’t Shoot, written in 1933 for the magazine Black Mask. Chandler’s stories were hard-boiled mysteries featuring an assortment of detectives and other tough-guy protagonists fighting the good fight against killers, drug dealers, gamblers the mob and more. In 1939, at the age of 51, he wrote his first novel  – The Big Sleep – in which he introduced his straight-talking, quick-witted, private investigator Philip Marlowe. 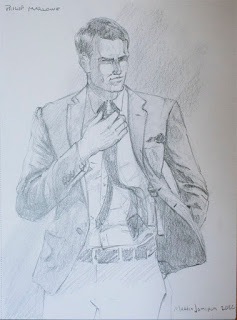 My finished sketch for the painting

In retrospect, one can see Marlowe developing throughout Chandler’s earlier stories. There are little bits and pieces of him in the detectives Dalmas (Red Wind), Delaguerra (Spanish Blood), Carmady (Gold Fish) and Grayce (The King in Yellow).

Marlowe, however, is Chandler’s masterpiece. He is a man of modest means and high ethical standards. He takes his job and the privacy of his clients very seriously, albeit with a wry sense of humor. He is tenacious when pursuing a case but has been known to refuse payment when he fails to meet his client’s objectives or his own high standards. Smart with a strong sense of character, he still pays a heavy price when he occasionally misjudges people and situations. He likes women but has firm boundaries. He drinks but not to the point of being an alcoholic. He smokes cigarettes as was common at the time. He speaks the language that the common man of his time spoke – our modern sensitivities not withstanding. In The Big Sleep, Chandler subtly uses the imagery of the medieval Knight as a hint to Marlowe’s character, using this imagery at various places in the narrative.

We can sleuth through Chandler’s other novels as well to learn much about Marlowe’s character, even watching it weather under the strain of his job, his friendships and his more intimate relationships. Chandler’s own problem with alcohol even takes its toll on Marlowe. In The Long Goodbye, Chandler appears to have written himself into two characters in the story, both of whom are alcoholics befriended by Marlowe. It’s interesting to see Marlowe pull no punches as he confronts these men, and by proxy Chandler himself, berating them for their self-absorption and destructive lifestyles. 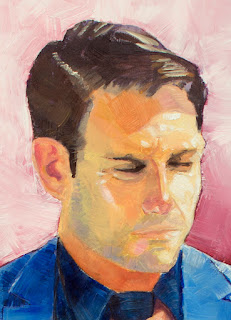 Marlowe is a reflective individual and I think
this quality comes through in my painting.

When it comes to Marlowe's physical appearance and his personal history, Chandler (who is known for his very descriptive writing) brilliantly leaves us with a lot of mysterious blanks to fill in on our own. We know Marlowe was born and raised in Santa Rosa California but by the time we meet him he has no family. With regard to his age, in the Big Sleep he is in his early 30s but in the other novels he is in his early 40s. We know he used to be a detective for the District Attorney of Los Angeles but he was fired for “talking back.” He has brown hair and brown eyes, is about 6 foot tall, 190 pounds. That’s pretty much all we know about him. So when I decided try to illustrate Marlowe, I turned to what is probably the most descriptive, Marlowe-focused paragraph in all of Chandler’s novels – the paragraph that gives us our very first glimpse of the man – the very first paragraph of The Big Sleep.


It was about eleven o'clock in the morning, mid October, with the sun not shining and a look of hard wet rain in the clearness of the foothills. I was wearing my powder-blue suit, with dark blue shirt, tie and display handkerchief, black brogues, black wool socks with dark blue clocks on them. I was neat, clean, shaved and sober, and I didn't care who knew it. I was everything the well-dressed private detective ought to be. I was calling on four million dollars.


Here we see Marlowe dressing his best for a very important interview and a chance to land a wealthy client. He’s feeling confident. It looks like a pretty straight forward job. A millionaire’s daughter is being blackmailed and Marlowe needs to lean into the blackmailer and flex enough muscle to make him stop. Soon however, Marlowe will realize this case is anything but simple as he finds himself knee-deep in more danger, filth and evil than he could have imagined. There are monsters in this story. They don't spit fire but their guns do. The knight setting out to rescue the wealthy man’s daughter is about to have his armor seriously tested. By the end of this story, he’s going to need more than a can of Brasso to restore whatever shine it once had. In The Big Sleep as well as the other novels, Marlowe’s armor will receive many dents and scratches – mostly around the helmet and over the heart – to give it a little more character. 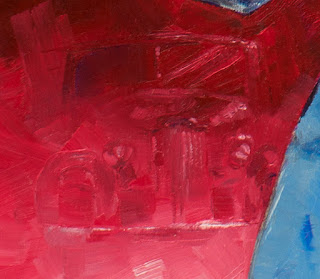 To represent the mystery and danger Marlowe faces in this case, I painted the background as a fog split by a swath of blood red. Within the red swath I added a couple of details suggestive of the time period (represented by the 1939 Packard) and the location of Los Angeles, California (represented by the palm trees). 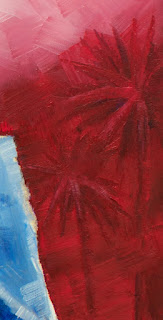 Also suggestive of the impending danger is the wind rustling Marlowe’s tie and suit jacket, revealing his holstered Luger automatic. 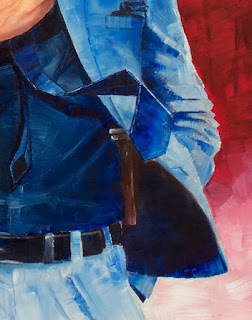 I could not resist placing this illustration into a mock book cover. I set the type to resemble the pulp magazine mastheads and the book covers of the 1930s and 40s. 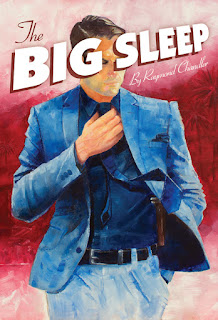 In his essay, The Simple Art of Murder, Chandler uses words to paint us a portrait of Philip Marlowe that is better than any illustrator could ever make with paint and brush:


“In everything that can be called art there is a quality of redemption. It may be pure tragedy, if it is high tragedy, and it may be pity and irony, and it may be the raucous laughter of the strong man. But down these mean streets a man must go who is not himself mean, who is neither tarnished nor afraid. The detective in this kind of story must be such a man. He is the hero, he is everything. He must be a complete man and a common man and yet an unusual man. He must be, to use a rather weathered phrase, a man of honor, by instinct, by inevitability, without thought of it, and certainly without saying it. He must be the best man in his world and a good enough man for any world. I do not care much about his private life; he is neither a eunuch nor a satyr; I think he might seduce a duchess and I am quite sure he would not spoil a virgin; if he is a man of honor in one thing, he is that in all things. He is a relatively poor man, or he would not be a detective at all. He is a common man or he could not go among common people. He has a sense of character, or he would not know his job. He will take no man’s money dishonestly and no man’s insolence without a due and dispassionate revenge. He is a lonely man and his pride is that you will treat him as a proud man or be very sorry you ever saw him. He talks as the man of his age talks, that is, with rude wit, a lively sense of the grotesque, a disgust for sham, and a contempt for pettiness. The story is his adventure in search of a hidden truth, and it would be no adventure if it did not happen to a man fit for adventure. He has a range of awareness that startles you, but it belongs to him by right, because it belongs to the world he lives in.

If there were enough like him, I think the world would be a very safe place to live in, and yet not too dull to be worth living in.”


All Illustrations © 2020, by Martin Jamison

Posted by Martin Jamison at 9:17 AM