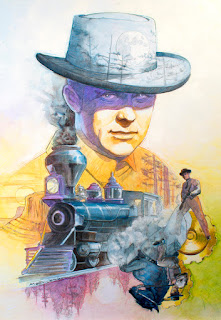 The Wild, Wild, West
(click any image for a larger view)

Personal projects are fun. I find it almost therapeutic when I can draw, design and/or paint something where I am my own art director and I can work at my own pace with no specific deadlines. I finished this personal project several months ago. It is a mixed media illustration of Robert Conrad as James West, the lead character from the 1960’s television show The Wild Wild West. The show featured two secret agents – James West and Artemus Gordon – chasing adventure and mystery in the untamed west. Part western, part spy fiction, part science fiction, it was campy and amazingly far fetched. But I loved it. 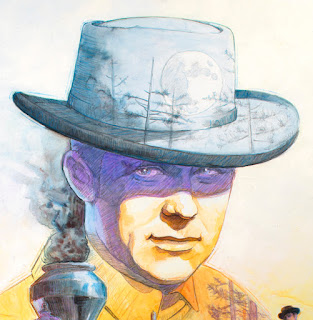 Robert Conrad did all of his own stunts for the show. He has even been inducted into the Stuntman’s Hall of Fame for his work on The Wild Wild West.  In fact he almost died in a stunt involving a chandelier in The Night of the Fugitives. If you have a chance to see this episode watch for the scene where he leaps from a balcony onto a chandelier only to land on his head.

Conrad was also an excellent horseman. In most episodes he could be seen riding a black American Quarter Horse. When the show’s producers realized he was such a skilled equestrian, they replaced his original horse with one possessing a little more spirit. Enter Shadow Trail, the horse he would ride for the remainder of the series.

It is worth mentioning that the The Wild, Wild, West is credited as the originator of Steampunk. Steampunk is a subgenere of science fiction/fantasy in which modern technologies are re-imagined as steam powered machines of the 19th-century. 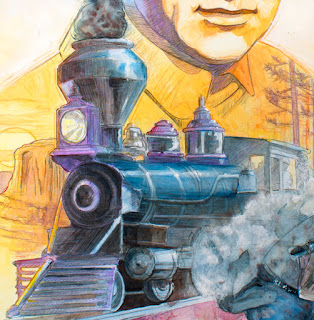 James and Artemus travel from adventure to adventure aboard their custom locomotive. Each episode begins with the train delivering them to their mission (some time early in the day) and ends with the train steaming them off into the mysterious night.

I completed this illustration in graphite pencil, water soluble oils and colored pencils on a gessoed masonite board.
Posted by Martin Jamison at 9:15 PM