Along the Yellow Brick Road 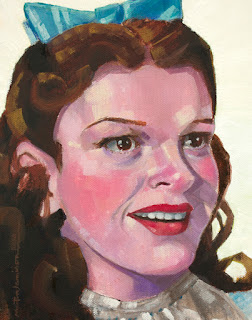 I’ve begun a series of paintings featuring the lead characters from the 1939 movie The Wizard of Oz. The first character up is Dorothy, played by actress Judy Garland.

I drew a pencil sketch of Dorothy directly onto the 8"x10" canvas. I finished the painting using water soluble oils. As I began painting over my line drawing, I noticed some very subtle adjustments that I needed to make. It’s surprising how the slightest detail can so dramatically alter a face (especially the face of a young woman) and can mean the difference between capturing a likeness or missing the mark.

This is a personal project which grew out of my purchase of four, 8"x10" canvases from Hobby Lobby. They were on sale and (though I typically like to work at larger sizes) I bought them because I’m a sucker for sales.

Then I thought, “OK now what in the world am I going to do with these?” A series seemed like a nice idea and as I considered a variety of subjects, the Wizard of Oz seemed like the most fun.

The 1939 production is such a wonderful film with the lead characters brought to life so masterfully by such talented actors as Garland, Ray Bolger, Jack Haley and Bert Lahr — not to mention all of the other fine actors and actresses who helped make this a family favorite that has stood the test of time. I do not believe even modern film producers could have made this movie any better.

I plan, God willing, to paint all four of the lead characters. I am currently working on painting number two.

“Which character,” you ask? That’s going to be my surprise. But here’s a hint — he’s a fun guy to have hanging around.

Posted by Martin Jamison at 1:39 PM